The Big Break: Act & Sing Game is based on social neuroscience research. Imitation therapy has been used to help children with autism communicate since at least the 1970’s1. It is well known that individuals with autism demonstrate a characteristic deficit in the ability to understand the emotions of other people2,3,4,5. One potential factor in autism is a deficit in activity in the brain’s mirror neuron system (MNS)3,4,6,7. The MNS is implicated in the understanding of other people’s emotional movements and empathy8. The MNS has been shown to get “exercise” and become more functional with mimicry practice9. This is where our idea for Big Break began – we wondered if we could exercise MNS activity, and thus increase the neural capacity for empathy10. We have tested the same therapy for kids with autism as well as adults with Parkinson’s, who also exhibit motor mimicry deficits and corresponding decreases in emotional understanding.

The tendency to mimic others’ emotional movements automatically during social interaction is weaker in autism than in neurotypical individuals11,12,13,14, whereas in neurotypical individuals, mimicry tendencies are correlated with empathy and MNS responsiveness15. While kids with autism do not tend to engage in mimicry automatically, we do know that they can mimic when we ask them to12,7,13,14.

Practice imitating others has been shown to enhance responsiveness of the mirror neuron system during later observation of similar movements9, indicating that this activity enhances neural connections in this area. Furthermore, imitation training studies have already demonstrated promising improvements in social skills in children with autism16,17.

Our own data shows that imitation practice from playing the game enhanced social responsiveness and accuracy identifying emotions in song, in a group of children with high functioning autism, compared to a control group18,19 (see Figures 1 & 2, below). Parent surveys have indicated that kids are engaged by the game which is important for training adherence. Children have also indicated that they enjoy the game and feel like they are learning something when they play. Therapists have reported that kids demonstrate gains in joint attention, social responsiveness, and even verbal ability from playing the game together, and that kids, including nonverbal kids get excited when they’re playing the game and seeing their movies play back. Our analyses of the Big Break game are still ongoing. If you are interested in being part of one of our research studies, or conducting one of your own, we’d love to connect! 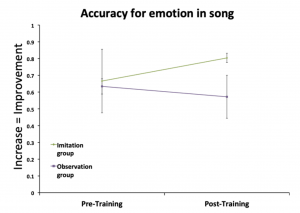 Figure 1. Accuracy for emotion in song. In a two-week daily training study with a prototype of the Big Break game, kids were placed in a group that played the game and took part in imitation of emotions, or played the same game but simply observed emotions. Kids in the imitation group gained significantly higher scores on recognition accuracy of emotion in song, compared to the observation-only control group. 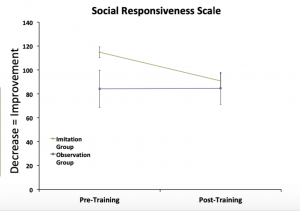 Figure 2. Social Responsiveness Scale. In a two-week daily training study with a prototype of the Big Break game, kids were placed in a group that played the game and took part in imitation of emotions, or played the same game but simply observed emotions. Kids in the imitation group showed decreased scores on the Social Responsiveness Scale, indicating improvement in social responsiveness compared to the observation-only control group who did not improve.